Alright, not quite 2 months but pretty close.

The chickens are all doing well. The big ones have grown up and are living outside now. My first attempt of having them live in the coop was thwarted by cold temperatures and rainy weather. They would have likely been fine, but they just looked so miserable I brought them back in the house for another week.

I took them out on a sunny Friday morning (last week) and we didn't end up getting home til late - flat tires and 50mph donuts will do that. Once home, it was pretty much dark, and they had all made their way into the coop except one bugger who decided to roost on a branch in the run. A quick scoop and ushered inside with the rest, and they've been loving the space ever since.

The 3 Bantam Cochins are doing well. Originally I was going to only buy 2 of them, but one had pretty bad pasty butt, so I bought it too so I could give it some attention and save it from pasty butt sickness. We named him Chip. For a week or two he was crying a lot (I say he because his feathering out has me 99% sure it's a boy) and not growing at all. He literally had no feathers while the other two were growing big and strong. I think the chick starter crumble was too big for him to eat efficiently, and/or the crumble I started them on (medicated) was preventing him from taking vitamins, which I switched out after a week anyway. I started grinding it up almost to powder, and that combined with electrolytes and some Nutradrench, he's pulled through and is growing rapidly. The early pasty butt recurrence resulted in lots of chick bath times, aka Spa Day. Chip really likes Spa days now, when he needs a little cleanup.

Their breeds are confusing. Dale is a Partridge Cochin, Eleven is turning out to be a Gold Laced Cochin Bantam (although I thought she was going to be a Birchen), and Chip, well, we have no idea what Chip is going to be, besides ridiculously cute. At this point, I'm guessing Partridge as well, but looking at the two together it's tricky. I suppose we'll see when he's older.


They're still in the brooder of course, it's going to be a while before they're ready to go outside, but dealing with 3 instead of 8 is much much easier in the house. After the big ones moved out, I spent a few hours vacuuming what I've affectionately named the 'Brooder Room' and oh man, after these bantam's are out, I will never put them in a room again. Garage or brooder outside. The DUST was just too much.

Now, the big girls. They love their freedom. I'm now convinced both Barred Rocks are female, while Avant Guarde's comb came in very red and he/she was much lighter in color, they're almost indistinguishable now. The Rhode Island Reds are coming into their color beautifully. The SLW's aren't as pretty as I'd hoped, but hatchery quality isn't breeding for perfect lacing, just breed.

The dogs love the chickens. They must check them once in the morning when I let them out, and be part of making sure they're in bed safely every night. So far, so good on the dog front.

Posted by Censored at 6:20 PM No comments:

I really wanted to capture more of their growth but I guess I just wasn't committed enough. Ah well. Thanks to chicken math this won't be the last set of chicks. In fact, I already bought more. Surprise!

The Barred Rocks are about 6 weeks now, the Silver Laced Wyandottes are 5 and the Rode Islands are 4. We still have some final touches to put on their coop and run next weekend, but with a new fence up and gate replaced, we're very close. I'll likely let them run around in their run this weekend and will capture some real pictures, instead of using my cellphone.

Just to make things interesting, I picked up 3 straight run Bantam Cochins from the 'assorted bin' last weekend. I thought chicks were small, then I held these guys and was blown away. I believe I've identified who will be what, but we'll see. Something about not knowing sex and breed is very blind-boxy to me. Best guess so far is a Partridge, a Golden Laced and a Birchen. They will be cute and colorful and I'm happy to get some.

I think they'll add a fun dynamic to our mix. At least, it will keep things interesting. 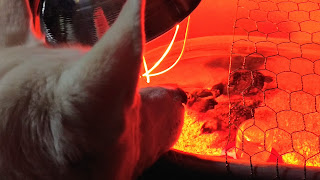 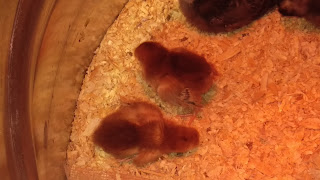 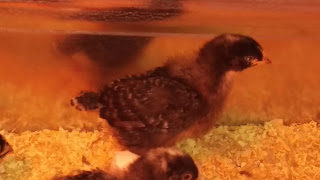 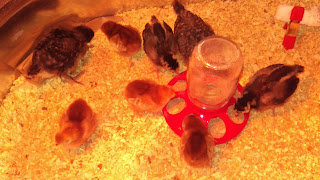 It's been a full day since the baby chicks hopped into a little box at the feed store and scootched their way into the car. The evening was full of 'peep peep' but they soon quieted down and seem to have become accustomed to their surroundings.

They've survived the first 24 hours, and seem to be thriving so far.

We ended up with 2 Barred Rocks and 2 Silver Laced Wyandottes. Friday the co-op will get a batch of Dark Red Rhode Island chicks, we'll try to snag a couple of those.

Of course chicken math applies. Phil calls it 'N+12'. We have plans to expand the coop already, it could fit 8 comfortably but we want them to have lots of room. I've already picked out and reserved chicks from a local farm that are rare, and we'll get those in August.

So yeah, chicken math + the chicken bug = we're just starting with chickens and already have so many picked out.

We'll start with these 4, though, and see if we can't keep them alive. Boy they sleep strangely sometimes. 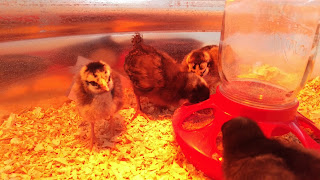 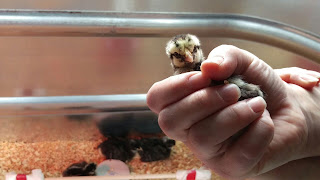 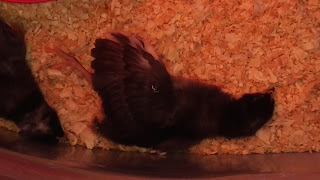 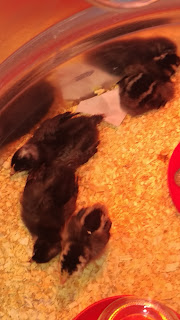